I’m not sure what the rating is on this Congress, but I know the 112th was just about the worst in history.  Harry Truman’s “Do Nothing” Congress passed 906 bills.  These assklowns passed 219.  You could argue only 219 things needs to be done, but you would be wrong.  The level of asinine was off the charts.  When you don’t teach people you end up with an actual discussion as to whether or not a woman has super powers to block impregnation from a rapist.  (she doesn’t).  Or this jewel from a Presidential candidate:

“When you have a fire in an aircraft, there’s no place to go, exactly, there’s no — and you can’t find any oxygen from outside the aircraft to get in the aircraft, because the windows don’t open. I don’t know why they don’t do that. It’s a real problem.” –Mitt Romney, suggesting it would be a good idea to crack a window at 35,000 feet, Beverly Hills fundraiser, Sept. 22, 2012

So when those bastions of intellect take responsibility for the sequester, you have to wonder, why are we letting these idiots do anything at all?  Part of it is I think a large sector of the population doesn’t give a shit any more.  They’re sick of it and depending on what side of the fence they are on they may consider it obstructionism or if they’re morons socialism.  Pop quiz.  What’s the largest most successful form of socialized medicine in the country?  The VA.

“I’m not concerned about the very poor. We have a safety net there.” —Mitt Romney (January 2012)

Not any more Biff.

What are the sequester cuts?

There is approximately 13% in cuts to the defense.  We just completed our 10th year in Iraq, a place we never should have been in the first place.  George W. Bush’s folly has cost this country $811 trillion dollars so far.  Why don’t we quit wasting money over there?  Oh no, we can’t do that!  What would happen to the defense contractors that spend all of that money on the lobbyist that buy our Congress all that nice shit?  That’s what’s wrong here.

I’m going to cherry pick a few.  $79 million cut to Embassy Security.  Great.  STFU about Bengazi.  STFU.  $512 million to Customs and Border Protection.  OK the wall is stupid, although I’ve heard that there really are parts of the border that are absolutely secure.  But if the border could take what looks like a total of $549 million cut and we are still safe according to the wingnuts, why did George W Bush spend all of that money in the first place?  You can’t have it both ways.

Over a billion in cuts to education.  Well played.  $1,090,000.  Here is the right wing game plan and it’s been the right wing game plan for 30 years.  Defund education, don’t allow the populous to think for themselves keep them in the dark and feed them bullshit.  That allows guys like Eric Cantor to crow about a plan that just cut 207,571  to his own state.  How does that work?  Currently Virginia has a 5.6 percent unemployment rate.  Thanks to Mr. Cantor that rate will be 7.6 percent.  You may not lay that turd at the President’s doorstep Mr. Cantor.  Go get your job creators to do something about it since they didn’t have to pay another penny in taxes.  Get it?  Not only are you unemployed uneducated pukes but you cant’ even better yourself because he defunded education.

They have cut $232 million from the FAA.  This will certainly make smaller airport close earlier, but it is also going to mean there are less air traffic controllers pushing tin. Who is going to be crowing the most when the first in air collision occurs because there just weren’t enough people doing the job to make it safe out there?  I’d like to see Cantor, Boehner and Ryan named in that suit.

Rep. Peter King who is kind of a shiny turd on his own broke ranks and told Rubio to stay out of his state for voting against Sandy relief.  I hate to say King is right but he is.  Florida has benefitted mightily from Federal disaster relief.  New York needed a hand up and Rubio voted against it. 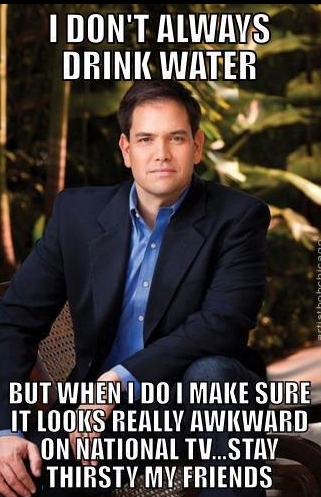 California certainly gets her share of this money between the wild fires and the earthquakes.  I’m ok helping out Seaside Heights and New Orleans and Joplin, MO and every other town that suffers a natural disaster.  That’s what we are here for, to help each other out.  That fact that we have become so mean spirited with such of an “I’ve got mine” attitude sickens me.  It’s not how I’m wired and I don’t like that it’s the way this country is going.  We are the land of opportunity, but we are also one of the biggest countries in the world.   With that comes responsibility.  Responsibility to each other.